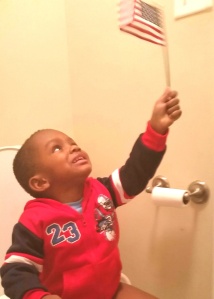 Well, the day finally came.   It was time to face the dreaded monster that all toddlers meet at some point in their toddlerhood.

That’s right.  It was time to potty train our son.

My husband suggested we start months ago, so I waited until his two week vacation to begin.  (Since he thought it was a grand idea, I didn’t want him to miss out on all of the fun.)

We decided to do the 3 Day Potty Training Method.  With this program, you throw away all of the diapers, wear big boy undies and watch for ques of when it is time to go.  You cancel all of your plans for those three days and are warned in advance to expect accidents.

We pumped up Maximus about potty training and even went to the store to buy stickers and let him select his reward.  Guess what he wanted?  Flags! A pack of four was less than three dollars.

DAY ONE: Bright and early on Monday morning at 6:00 a.m. we heard Maximus waking up.  We rushed in, excited more than ever, and told him TODAY IS THE DAY!!!!  He got all of his diapers out of of the diaper holder.  He and dad walked to the garbage (multiple trips) and threw them away.  I’ll admit, I walked behind them once they left and took the diapers out of the garbage in case this three day method didn’t work.  (A’int nobody got time for throwing away perfectly new diapers you may use again.)

We took a field trip to his bathroom and the new potty.  We talked about how we would no longer use diapers and would be a big boy and use the potty.  All he wore was his undies, socks and a shirt. Surely our pep talk would work right away.

He peed on the floor.

Pretty much all day.

Each time was not too long after we asked him to let us know if he needed to go. He earned a couple of stickers for one drop of urine entering the toilet (as we ran as quickly as we could to get him there) and we made as big a deal of it as possible.

After day one, I was pretty confident he wasn’t ready yet.

DAY TWO: My husband and I woke up again excited to conquer the world of pottying. We were ready to help Maximus earn more stickers, which he seems interested in.  He really wanted a flag which we were using as a grand prize for a full incident.

Luckily, day 2 consisted of a couple of pee pees on the potty.  We all did the “Pee Pee on the Potty” dance. We called Aunt Sharon.   Big things were happening.  Maximus was excited because he earned his flag.  We were excited because there was a slither of hope.  Could the pee gods be listening to us?  Was a miracle getting ready to happen?

DAY THREE: I’m not really sure what Maximus dreamed about overnight, but he woke up with very little interest in using the potty.  Let me change that. He woke up with no interest in the potty.  He didn’t want to be close to the bathroom.  Our dance was no longer exciting.  The words ‘pee’ and ‘potty’ just made him turn up his nose. He looked at us like we were crazy.

I was pretty sure that those diapers I hid in the closet would be coming out again really soon. I went to bed feeling like we lost the battle.

DAY FOUR: Instead of giving up, we decided to give potty training one more chance. The morning started off the same. Instead of asking him to tell us when he needed to go to the bathroom, we took him every 30 minutes to try.  Mid afternoon, my husband had a man-to-man talk with him.  I’m not sure what happened at that talk, but miraculously Maximus used the bathroom.

And he kept using the the bathroom for the rest of the day.

And throughout the weekend.

*Now, it’d be great it that was the end of the story and everyone lived happily ever after.  Unfortunately, the journey of pee-hood isn’t that easy.  We have had both good and bad moments with remembering to use the bathroom.  I also learned that my son is a boy.

We went to an outlet mall and stopped for food on the way back.  I sat him on the toilet at Burger King, I stand up to breath for 1 millisecond and he sprays urine all over the bathroom stall door.  I look wide eyed at the door and can’t believe what I just saw.

So, not only are we dealing with encouraging him to use the bathroom. Once there, the direction in which he points makes all the difference!

Also, pooing on the toilet is not happening. Not sure why to him it feels better to poo in his big boy undies, but it does.  And once it stinks, he let’s us know.  Or, he let’s us find a poo in his bed. Can you say happy, happy, joy, joy?

We are glad that we are over the first hump of Maximus knowing how to use the potty. We never got the diapers back out. We are hoping in the near future that he’ll let us know when he needs to go (versus us asking him) and he’ll be able to do #1 and #2 on the john like a champ.

The Monday after spending the weekend with Milton, I had my first OB-GYN visit on October 24 at 1:00pm.  As excited Milton was for us to have a baby, I wanted to get through the doctor visit to know that everything was going well.  This ended up being probably the longest doctor visit ever!

It started with waiting in the waiting room.  Two families with newborns were waiting for their appointment and one couple with their second child said this was definitely their last.  They shared baby stories and suggestions and I just eavesdropped.

Once Mrs. Turner (me) was called back, the first thing that was done was to pee in a cup and take my weight and blood pressure with the nurse.  From there I went into the doctor’s office (not a patient room but an actual office with a desk and chair) and talked with my doctor.  We talked a lot about medical history, the tests I wanted to have run and some of the things to expect.  She wanted to schedule some follow up tests based on our discussions.  I realized that I know a lot about my family history, but very little about Milton’s.  We definitely need to have that discussion this weekend.

From there I went into a patient room where we did my paps smear.  I asked the Dr. K about this bulge already sticking out and whether I was fat or having twins.  She said it was neither and that I was probably bloated (and would stay bloated for most of the time).

After that we went into another room for the ultrasound.  This was the part I was most excited about.  As they looked at the ultrasound, they said everything looked smaller than where they had me along in my pregnancy.  They asked when my last period was. I said I thought it was September 7 (because I really didn’t keep track and it was varied once I got off the pill).  However, I did know the last time my husband and I had sex.  Since he’s out of town, our date of “making baby” was easily trackable.  Once I told them that day, they realized I was less far along than the assumed. And because of that, the photo matched how far along I was.  So, no baby to look at yet.  Just a yolk sac.

So another ultrasound is schedule in two weeks.  And now I’m nervous.  I went home and googled different images of 4/5 week ultrasounds and couldn’t find any that looked like mine.  I pray that everything is okay and that Baby Turner is still developing okay.  I’m ready to start a family and be a wonderful mother.  Come on baby Turner, let’s start developing into a healthy baby!!!