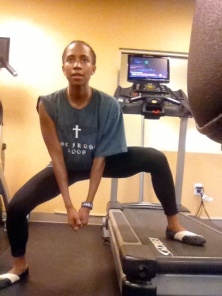 It’s hard for me to believe that I’m already four weeks into my competition prep.  And, I’ll be honest.  There are many times I wanted to quit. Many.  For many different reasons.  But, unfortunately/fortunately, I let everyone know I was going to compete and I don’t want to be seen as a quitter.

Preparing to compete is no easy venture.  When I competed from 2008-2010 I was worry free.  I was single and ready to mingle.  The main thing on my mind was competing and I went at it full force.  The main thing I had to worry about when I woke up in the morning was what color sports bra to wear to the gym.  My abs were cute, I was cute, I was on a mission.

Now, all of that has changed.  I am married.  I am a mother of a toddler. My priorities are completely different.  I wake up thinking about the activities my son and I are going to do together.  At night I can’t wait to spend quality time with my husband.  It sucks not to be able to eat dinner with them at night and eat the same things they do. We went on a vacation to DC for a week. While I cooked most of my food, I enjoyed two meals with husband. I’m so over chicken breasts.  I’m so over tilapia.

The other thing that is different this time is the category I’ll be doing.  I LOVED competing in fitness.  The surge of energy doing a two minute routine is thrilling.  I actually started as a figure competitor.  That was cool too because I was able to build muscle, but not too much muscle.  But, now…… Now, I am a bikini competitor.  I remember when bikini first became a division and I thought very little about it.  Even now it’s my least favorite division, although it’s the most popular when it comes to numbers. I now must get on stage in an itsy witsy teeny weeny (I don’t know the color) bikini!

So, I’m just weeks away from my first post-marriage, post-pregnancy competition.  I had a major setback last week when I became sick with meningitis type symptoms.  I was in bed and out of commission for almost six days.  It sucked.  I didn’t eat like crap, I just didn’t eat.  But I learned it’s one of those things you either let hold you back or use as a comeback.  Mine is going to be a comeback baby.

Oh yeah, one more thing.  My good friend Larry Jackson is my trainer.  Some people think that could be weird, but it’s actually been a good thing.  He knows me and I trust him.  While I may call him and very briefly complain about eating tilapia three times a day, he know when he gets off the phone that I’ll eat it. He and his wife have fallen in love with the competition industry and I’m proud to be a part of his team.

So, please wish me luck and say a prayer that these next couple of weeks go as planned.  Pray my butt gets smaller and my smile gets wider.  Pray the judges say, “That’s one hot mama!” and award me first place. Now, off to eat some asparagus I go.