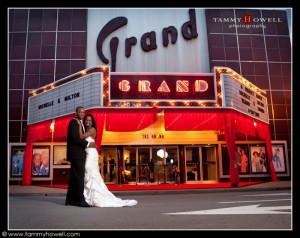 The week leading up to the wedding there was plenty of flooding and tornado warnings.  I worried that my wedding day would be the same. Saturday, April 30 had perfect weather.  The day before all of the bridal party arrived.  All of the groomsmen drove in from out of town. One ran out of gas 30 miles outside of Louisville – and left his wallet in Indy.  Not good.  One of my relatives drove 10 hours to the wedding, but never bothered to tell me he was coming.  Let the stress begin.

I had to ask Milton for one day not to have the open relationship that we have where we talk about everything.  If something went wrong on our wedding day, I preferred to be out of the loop. The rehearsal and rehearsal dinner went well.  I enjoyed bonding with my three bridesmaids after everyone else left.

Wedding day starts at 8:00am with my hair. Followed at 11:00am with makeup.  We arrived at The Grand in New Albany at 1:30 to take pictures.  First pics/video were of me getting ready.  Then, Milton and I had our “First Look”.  This is a time when only he and I are in a room together.  His back is to me as I walk down the aisle and then he turns around.  It was a golden moment.  We then all take all group photos.

I wasn’t nervous for the entire day, except for one moment – our guests were in their seats, the bridal party was downstairs and I was alone upstairs waiting to come down. At the top of the stairs I could see the back of Milton’s head in the mirror.  The reality of it all set it.  I walk into the room surrounded by all of our family and friends and all of the attention is on me.  I see Milton in the distance wiping his eye and all I want to do is be by his side.

We tried to make the ceremony and reception personal and meaningful.  During our first dance (to Luther’s So Amazing), Milton and I recorded messages to each other that played over the song.  We also did this with the mother/son and bride/uncles dance.

I did a dress change (yes, there were two wedding dresses) and was made a Kappa sweetheart by Milton’s fraternity.  We cut the cake, did the Electric Slide and took plenty of photos. My one and only regret was that I didn’t get to speak to many of the guests there.  But, I hope they know how much I appreciate them.
At the wedding we also announced where we would be living for Milton’s first two years in the JAG – not Germany, not Hawaii, not Ft. Bragg.  We are headed to Fort Knox!!!!!  Because Milton took the bar in IN, he couldn’t live in that state – however KY was fair game. We’d like to start a family and would love to be around friends and family as we go through that transition.  So, I’ll be here.  Milton will be here. The only thing that will change is my last name!