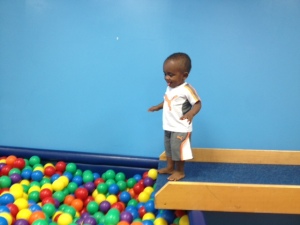 I think everyone overcomes many obstacles in life.  Some are larger than others and many of them make us stronger as a person.  Today I was able to watch my son Maximus overcome one of his.  All summer we have been attending My Gym Louisville.  It’s a cool gym for kids. Maximus is in the Waddler group and he’s able to run, jump, climb, slide and swing.  We love it!

They change the set up of the room around every week. Today they had a walking plank that led into a huge pit of plastic balls.  Although Maximus loves the balls, he’s always scared to jump into them.  Usually I’ll say, “1, 2, 3” and throw him in and he has the brightest smile.  Today started like a normal day with the balls.  He loves to walk across the plank, but as he gets closer to the end with the balls, he walks closer to me and holds on tight to my shirt.  You can tell he’s scared.  He would gradually push his toe over the edge and then step in in slow motion.

Next, he tries to climb out of the balls back onto the plank so I push his booty in the air to help him. He gets back up and once again walks to the edge. He scoots closer to me and then falls in.  It takes him about four times to realize jumping into the balls are pretty fun and touching mom isn’t necessary for it to be successful.  So the next time he gets on the plank, he walks to end, stands there and jumps right in.  I become one proud parent!  I watch him do it several more times and each time he’s more confident. In less than 20 minutes I was able to watch my son overcome his fears.  I think toward the end I was smiling more than he was. I’m so excited to watch him continue to grow. I’m glad that he still thinks I can solve all of his world’s problem, but I’m also glad that he’s willing to try to solve his own!