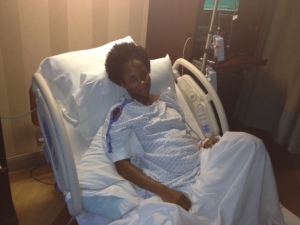 I woke up excited Wednesday morning because I had a pregnancy massage planned.  11:00am to be exact. Happy, happy, joy, joy!  I was 27 weeks pregnant and my body really needed it. I called my doctor’s office to see when I could come and have my cervix measured.  They didn’t know a time at first, but soon called back and said to come in at 11:00.  Yuck!  I picked up the phone and canceled the massage.  I walked in the office as normal and went into the ultrasound room. They did a transvaginal ultrasound.  As soon as they started, the lady said, “We need to get a doctor.”  Of course I became worried.  My doctor was not in the office but Dr. Link entered.  They were unable to recreate what they saw but they did save a photo of it. I was told to get dressed and the doctor would talk with me in his office.  Not good.  He said my cervix was funneling and that I needed to go home and rest. He said he’d follow up with my regular doctor and to come back in a week for another measurement.

I got dressed and went to my fitness studio to drop something off. As I was headed back down to the car, my phone rang and it was my doctor, Dr. Kuntz.  She asked if I could stop by the office.  Sure, I replied.  I’m thinking I’ll go in and come right back out and continue my errands. I walk back into Baptist East Hospital and got back on the contractions monitor.  They were still better than the day before.  I was given another transvaginal ultrasound. Although they saw some funneling, my cervix measured fine.  I was getting ready to be let go and then my doctor asked if she could go on and do a regular ultrasound so we could check the baby.

This excites me because I get to see Baby Turner again.  This time the mood changed.  They saw what they call “dynamic cervix funneling” and it was something they could only see on the abdominal ultrasound.  I knew something wasn’t right but didn’t exactly know what was going on. Long story short: my doctor called the Advanced Fetal Medical doctor, he said I need to go to the hospital with a Level III NICU, I was moved via ambulance (during a hail storm) to University Hospital and immediately placed into a room.

I tried to be cool, calm and collective until that moment.  I hated having to call Milton to tell him the news and just wanted Baby Turner to be okay. Of course he was very nervous and left work to meet me at the hospital. An IV was placed into my arm and monitors were placed on me to monitor my contractions and Baby Turner’s heart rate.  My newly appointed doctor, Dr. Weeks came in and did another abdominal ultrasound. Milton was there by this time and we were both able to see the funneling. Here’s the best way to describe it. My cervix measures fine in it’s normal state.  However, whenever I have a contraction this big funnel appears (which is my water sack) and it gets very, very, very close to my cervix – which means there’s a great chance my water could break.  This made Dr. Weeks very nervous, especially being only at 27 weeks.  So, I was told that I would be on bedrest – in the hospital – until I’m at least 32 weeks along.

This broke my heart.  I had so many plans for the month of April and now each and every one of them needed to be canceled. I thought about my Zumba studio and the fact that I wouldn’t be able to see that beautiful group of ladies for awhile.  It was overwhelming because I had no time to prepare my life for the drastic change.  Fear, stress, worry (and hunger)  all took over my emotions.  I tried to remain calm, though, because I knew it was all being done for a cute baby boy that needs to “cook” just a little longer before he can join us!