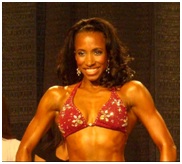 For the past eight weeks I have been training for a figure competition.  I gave up all of my favorite foods: pasta, sausage, cheese, bread, fruit, and desserts.  My meals consisted only of chicken/sirloin or fish, brown rice, egg whites and vegetables, vegetables and more vegetables and protein shakes.  Nothing else for 8 weeks with five meals a day.  I also found myself at the gym more – six days a week.  Some days of training required morning cardio so I found myself dragging to the gym at 5 in the morning.  Yes, five in the morning for a two hour workout.  The worst was probably the water.  The final week of prep had me drinking 2 GALLONS of water a day.  I was running (not walking) to the bathroom every 30 minutes.

I noticed physical changes throughout the entire process.  While my weight didn’t change, by body fat decreased by 5% and I lost two inches in both my hips and waist.  I also gained muscle and overall looked more tone.  I had to give up a lot of things, including dating.  I wasn’t able to go out to eat at restaurants and although I could do movies, the smell of popcorn drove me crazy.  Not only that, but after work and working out, all I felt like doing when I came home was eating and then sleeping.  It really was all about me during this time.

My first competition was this past Saturday in Covington. My goal was Top Five in my height category. There were over 100 women entered and at first I was intimidated by everyone. You immediately start sizing yourself compared to others.  The more I looked at others, though, the more I realized that I looked as good, if not better than many.  I felt more at ease. There were six height classes and I was in the 2nd shortest (figures)!   Being on stage in front of the judges was glorious.  I’ve grown up performing in front of others and the surge of energy is amazing. As they start giving out awards for my class, I realize I have a great chance of winning – and I did!!! First place, which qualifies me for nationals, what a thrill! (and the pizza I ate while driving home was so tasty!)

I’m still on cloud nine and it’s not only for winning.  I set a goal and saw it through.  I found myself cooking a week’s worth of food every Sunday and going down grocery aisles that only healthy people stroll.  I pushed myself physically. I stayed focused, surrounded myself with positive people and resisted temptation at every corner.  Only time shall tell what my figure future holds!  Click here for the complete blog.