“Not Your Average College Student” 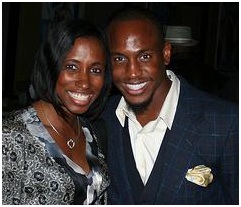 If you’ve been to a service at Bates Baptist Church or seen the University of Louisville Black Diamond Choir recently, you’ve been blessed to see the enthusiastic, sharp dressed, bright smiled Keon Jones.  He automatically stands out in a musical crowd and is in no way trying to hide his love of God.  This week Keon left to go home to Baltimore before starting grad school in January in Dallas, TX for Christian counseling.  Although I see Keon out at various places, I never knew his story.

So here it is: Keon grew up with a mother, father, older sister and twin sister. They did not have a church home until he was 13.  Before that, they would watch church on television and mom would make them take notes.  He played sports in high school and ended up in good ole Louisville, KY in hopes of walking on the University of Louisville Cardinals football and/or baseball team.  Neither happened.  God closed those doors but gave him something better to love – people enjoying God.  “God put a fire in me and freedom in my worship that is liberating to those looking on.”

When I was in college (back in the day) you would throw on a comfortable pair of sweats and a t-shirt and roll out of bed just in time for your 8am class.  Not Keon.  Most people remember Keon because he dresses to the nine.  A blazer, button-up shirt and slacks are common class attire.  Choir rehearsals have seen their share of the Keon bowties.  Dapper suits are readily available and willing to make an appearance.  Because of his style, some people have asked him if he is gay.  He shakes his head no as I ask this question myself and knows that some people just don’t appreciate his individual style at the age of 22. Keon shares that he welcomes those instances as opportunities to share the gospel with brothers that equate well kept black men with homosexuality.

Keon is 10 years my junior but I can’t wait to see what his future holds.  He fell in love with Louisville for the years he was here.  He arrived without any family, and left with more mothers, fathers, brothers and sisters than he could ever imagine.  He is passionate about his faith and believes in spreading God’s message to all around.  God’s blessings to you Keon, thanks for leaving your mark here!